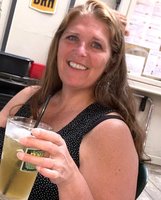 Warrensburg: Pam Ladd passed away at home on June 12, 2021 following a long and stubborn showdown with cancer. Like most opponents in her life, she looked it square in the eye, refusing to back down; there were things to do, places to see, and a daughter and grandson she wasn’t ready to leave. Determined to see her daughter Sydney graduate from college, she achieved that goal. One month later, her formidable foe finally prevailed. Pam was born in Hartford, CT. The family relocated to Hudson Falls soon after, then later moved to Warrensburg where she lived most of her life. She attended Warrensburg High School until her senior year and graduated from Hudson Falls High School in 1981. She attended Elmira College and Boston University. After earning her degree in computer sciences at Adirondack Community College, she held several positions as a programmer/analyst at HUM Healthcare Systems, the American Cancer Society, Hudson Headwaters, and most recently, Four Winds Hospital of Saratoga. Pam loved to entertain, and she was entertaining. Gatherings on her deck were a rite of summer which she officiated with charm, cordiality, and humor. If there was a family celebration, it would most likely be held on her deck. That was her happy place. She also enjoyed escaping to her camper in Lake George. Competitive, meticulous, seemingly quiet and reserved, Pam was a keen observer who listened more than she spoke, measured her words carefully, and fired with a biting wit. Sometimes it was difficult to determine whether or not she was kidding – her poker face was unparalleled. If you didn’t know her, you might be just a little afraid of her. But that was all for show. On the inside she was caring and compassionate, always willing to help or care for others, no matter their circumstances. Combining her love of mixology and the Adirondacks, Pam’s proudest achievement (second to raising a headstrong daughter) was co-writing a book with her sister, Kim. In 2011, on a long car ride to Tennessee with her sister and their respective daughters in tow, the conversation turned to creating cocktails, where it continued for hundreds of miles (complete with eyerolls and insults from the daughters.) Two years and more than 120 bar visits later, Happy Hour in the High Peaks: An Adirondack Bar Guide was released. Pam is survived by her husband Robert S. Montgomery of Queensbury; daughter Sydney Ladd Russell (also daughter of the late Denis Russell of Johnsburg) of Hudson Falls; stepdaughters Kristen (Bryan) Seybolt of Glens Falls, Jennifer (Joe) Brewer of Glens Falls, and Megan (Dan) McGarr of Woodbridge, VA; grandson Colin DeLoria of Hudson Falls, NY; parents Karen (William) Muermann of Cosby, TN and Robert (Louise) Ladd of South Glens Falls; sister Kim (Tony Cocca) Ladd of Thurman; brothers Marc (Dale) Ladd of Hampstead, NC, and Jon (Kelly) Ladd of Johnsburg; stepsister Amy Muermann of Pitman, NJ and stepbrother Roy (Jackie) Muermann of Malta; nieces Acacia and Jami; nephews Lewis, Kaleb, Rob, Arron, Tony, and Steve; aunt Marsha (Ray) Dunton; and many cousins and friends. Friends may call on Pam's family from 5 to 7 pm, Tuesday, June 22, 2021 at the Alexander Funeral Home, 3809 Main St., Warrensburg. A graveside service to celebrate her life will be conducted at 10 am, Wednesday June 23 at Pine View Cemetery, Quaker Road, Queensbury. In remembrance of Pam’s life, the family requests memorial donations in her name be made to High Peaks Hospice, the C.R. Wood Cancer Center at Glens Falls Hospital, or the charity of your choice. Please visit www.alexanderfh.net for online guest book and condolences.