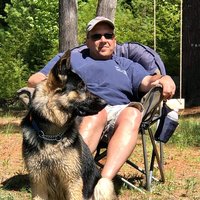 Warrensburg: Jonathan W. Fifield, 49, of Third Avenue, passed away peacefully, Friday, April 30, 2021 at his home surrounded by his loving family and friends following a courageous battle with cancer. Jon, also lovingly known as “Little Pick”, “Pickles”, and “Jonny-Fly” was born along with his twin sister Jana, in Cambridge on October 31, 1971 to Peggy and Wayne Fifield. Jon attended Greenwich Central School while growing his love for cooking and working part time at his mom’s pizza shop and with Chef Steve Knopf at The White Swan Café, before graduating in 1990. He moved on to join the culinary arts program at Adirondack Community College. Jon cooked and tended bar at the Colonial Arms in Warrensburg, where he met Robin, the love of his life. His love of people and ability to “sell an ice cube to an Eskimo,” led to many years in sales; the bulk of which were spent selling cars at Garvey. In 2012, Jon began working at Hollingsworth & Vose, where so many coworkers became family. Jon had an incredible work ethic, and devoted his time to working hard and providing for his family and loved ones. In his rare moments of free time he loved spending time with his dogs, Willow Marie and Hudson Andrew. Dog trips to the river, throwing endless Frisbees, and relaxing with a dog at his feet were among his biggest loves. Jon loved fishing with his nephew, Nate; camping and hiking with his wife and extended family; and took cherished trips to Jamaica with some of his favorite people. He enjoyed hosting and cooking for family and friends, and relished performing for any audience. Some would say he missed his calling as a standup comedian. Jon gave of himself unconditionally to anyone in need, and always had a laugh and a smile to leave behind. Jonathan is predeceased by his mother Peggy; his father Wayne; his brother Gary Townsend; his mother- and father-in-law, June and Sherman Gray; his sister-in-law Michelene Gray; close friends George Caprood and John Rock; and his beloved dogs Kalli, Archer, and Pyper. Left to cherish his memory are his wife of 30 years, Robin Fifield of Warrensburg; his twin sister, whom he affectionately referred to as “the other egg”, Jana (John) Solan of Greenwich and their daughter Isabelle; his sister Michelle (Michael) Schreiner of Greenwich and their children Michael, Tyler, and Sarah; his children, Michael Wescott (Jessica Lafountain) and Nastassia Wescott, both of Warrensburg; his “stepchildren” Erika (Thomas) Case of Glens Falls, Nichole (Michael) Packard of Glens Falls, and Nathan Baldwin (Dawn Parks) of Warrensburg; his grandchildren Saige and Jacy Wescott, both of Warrensburg; brother-in-law Dr. Sherman Gray, Jr. (John Flynn, Jr.) of Connecticut; sister-in-law Virginia (Michael) Wisenski of Massachusetts; brother-in-law Raymond Gray (Kathy Suriano) of Albany; sister-in-law Roxanne Jones of Minerva; brother-in-law Ira (Penny) Gray of Warrensburg; sister-in-law Richelene (Mark) Morey of Warrensburg; brother-in-law Kevin Gray (Judy Gordon) of Olmstedville; sister-in-law Cheryl (Mark) DiPasquale of Warrensburg; sister-in-law, Lauranel Gray of MO; sister-in-law Candace (Mark) Smith of Glens Falls; brother-in-law Darryl (Kim) Gray of Queensbury; and several aunts, uncles, nieces, nephews, and cousins. Jon left everyone he met with a smile, and will be greatly missed by so many. Friends may call on Jonny’s family from 12 to 3 pm, Saturday, May 8, 2021 at the Alexander Funeral Home, 3809 Main St., Warrensburg. A memorial service to celebrate his life will immediately follow the visitation at 3 pm at the funeral home. Family and friends are invited to gather at 4 pm at the Masonic Lodge, 3893 Main St, Warrensburg. Memorial donations may be made to the Dana Farber Cancer Institute’s Research for children’s sarcomas, the SPCA, or any dog rescue organization of your choice. The family wishes to extend their gratitude to Dr. Christopher Mason and the incredibly caring nurses at the CR Wood Cancer Center; Dr. Wang, Dr. Nathanson, Dr. Marshall, and the amazing staff at Dana Farber Cancer Institute and Brigham & Women’s Hospital in Boston; and all of the family, friends, and local businesses who have supported the family with love and contributions throughout this difficult journey. Please visit www.alexanderfh.net for online guest book, condolences, and directions.