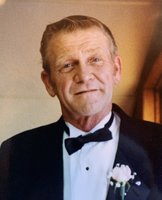 June 6, 1941 – December 20, 2020 Warrensburg – Calvin P. “Rusty” Duell, passed away peacefully December 20, 2020. He was third in line of 11 children to the late Fred and Edna (Wood) Duell. Born in Corinth, NY, Rusty attended Warrensburg Central School and has a Master’s Degree from the School of Hard Knocks. After leaving school, Rusty worked various jobs and then served his country in the Unites States Army. He was a member of Company B, 2nd Battalion, 38th Infantry in Fort Benning, Georgia. He received an Honorable Discharge in 1964. Rusty was the Company Commander’s personal driver. His Captain, Cecil J. Ramsey, wrote in a letter of appreciation, “Your attention to duty and willingness to work long hours in excess of normal duty hours has won the admiration of your superiors, contemporaries and subordinates.” This statement foreshadowed how he lived the rest of his life. A talented workaholic, Rusty was an independent, self-sufficient man. He began his career as a logger which eventually evolved into his job as a long haul trucker for Sweet Lumber. He later owned his own dump truck business and most recently was a driver for Stonewall Construction. Nothing would come between Rusty and his work. Rusty also had an affinity for racing stock cars. He raced the #35 at Fonda Speedway, Devils Bowl and Albany Saratoga Speedway. Many late nights were spent in the garage with his pit crew getting ready for the next race. One of Rusty’s passions was being involved with Warrensburg Little League as the coach of Duell’s Loggers. He coached all three of his sons during their Little League years and instilled his work ethic and competitiveness in all of the team members. None of this would have been possible without his wife of 56 years, Donna Duell. Her steady hand and guidance during some lean and difficult years, kept the family together and going in the right direction. We know Rusty is looking down from Heaven, probably from the window of a new truck, and saying thank you to Donna for keeping him in line - most of the time. Rusty is predeceased by his parents, siblings Douglas Duell, Linda Duell, Kenneth Duell, Connie Wheeler, Pat Frasier, and Mike Duell. Rusty is also predeceased by his infant daughter Sherry. He is survived by his loving wife, Donna Duell, of Warrensburg, and his boys: Douglas (April) Duell, of Glens Falls, David (Amanda) Duell of Holland, NY, Darren (Diane) Duell, of Warrensburg and Jerry Lewis of Lehigh Acres FL. Rusty is also survived by his sisters Barbara Irish, Veronica Shuman, Lisa Duell, brother Ronald “Pete” Duell. Affectionately known as PopPop and Grandpa Rusty, he is survived by his grandchildren: Colin, Alex, Tristan, Jacob, Izzy, Zach, Liz, Savannah, Theo (who will miss backing the truck up into the yard at the end of the day with his beloved PopPop) numerous cousins, nieces, nephews. Rusty is also survived by his numerous close friends and trucking buddies. He is blowing his air horn at all of you and will be at the table in Bill’s Diner in spirit. The family wishes to thank Warrensburg EMS, the Glens Falls Hospital Emergency Room doctors and nurses for their compassion and care after Rusty’s last ride. In lieu of flowers, please consider a donation to Warrensburg Little League, c/o Brian Seeley, President, PO Box 301, Warrensburg, NY 12885 in Rusty’s name. Per Rusty’s wishes there will not be any calling hours or funeral. Graveside services are tentatively scheduled for June 6, 2021. Please visit www.alexanderfh.net for online guestbook and condolences.