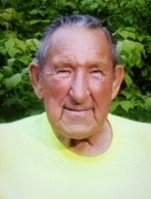 Northville/Johnsburg: Levi C. Mosher, 87, of South Johnsburg Road, passed away Friday, January 17, 2020, surrounded by his loving family at Nathan Littauer Hospital in Gloversville, NY. He died peacefully of natural causes and he remained strong willed and of sound mind right up to the end. Born on September 8, 1932 in Thurman, NY, he was the son of the late Fannie Galusha and Louis Mosher Sr. He attended Johnsburg Central School and owned his own business, L Mosher and Sons Logging which allowed him and his sons to work side by side for many years. After leaving the logging business, Levi was employed by E Galusha & Sons LLC. The years he spent working with the Galusha’s brought many happy years doing something he loved and being close to extended family until he had to give this passion up at the age of 84. Levi was a man who enjoyed the outdoors and spending time with friends and family when he wasn’t working. He was a logger and enjoyed hunting, fishing, camping and traveling with friends and family. He had a true passion for pony pulling and going to fairs. He loved riding his Harley Davidson motorcycle “Trike” with his family. He also enjoyed the Casino. These are the things that kept Levi happy and occupied after losing his wife. Levi was very compassionate and had a big heart for animals big and small. He enjoyed sneaking treats and table scraps to his K-9 friends Snoopy, Tippy, and Jasmin. He married Patricia A. Dalaba, who predeceased him on February 23, 2011. They resided on South Johnsburg Road in Johnsburg. When they both retired, they had a dual residence in Zephyrhills, FL where they would spend their winters to escape the cold. Levi was a man of few words, although anyone who had contact with him was attracted to his genuine and loving demeanor. He was a generous man and would give his shirt off his back or his last dollar to assist his friends or family. He was loved dearly and will be greatly missed. Besides his wife and his parents, Levi was predeceased by three brothers, Henry, Walter, and Louis Mosher Jr. Levi’s survivors include his five loving children and their families. He is survived by his daughter Angie Dimick, her husband LeGrande “Butch” Dimick, their daughter, Laurie Dimick and her companion, Brendan Twomey, and son, Devin Dimick, their daughter, Wendy Ferguson and her husband Paul, and daughter, Ashley all of Edinburg, NY; Daughter Lucinda “Cindy” Holdridge and her husband Carl, of Ohio; Daughter Leisha Davis, and her husband Peter, their son Brent Davis and his wife Abigail “Abi”, and their son Peter “Petey” Davis all of Columbia SC, son, Tyler Davis and his fiancé, Margaret “Meg” Backwinkle of Charlotte, NC; Son Raymond and his wife Tricia and their daughter Kelsey, and son Darrin of Broadalbin, NY, their daughter Kristen and her companion Kyle, of Athol, NY; Son James of Edinburg and his daughters, Hillarie and Hannah. Levi is also survived by his siblings and their families. His brothers, Roger, Edward and his wife Jen; His sisters, Wilma LaFond and her husband Gene, Viola Watson and her husband Craig, Eva Conway, and Darlene Coulter and her husband John. He is survived by several nieces, nephews, and cousins which are so extensive it’s difficult to list them all. At the request of Levi, there will not be any calling hours or funeral services. The family will have a graveside service for Levi in the summer of 2020 and the details will follow at a later date. Expressions of sympathy may take the form of a donation to the Edinburg Ambulance squad as a gift of thanks for the many times they transported Levi to the hospital for immediate care. Donations can be sent to Edinburg Emergency Squad PO Box 904, Northville NY 12134 in memory of Levi Mosher. Please visit www.alexanderfh.net for online guest book and condolences.